The architecture of the theatre

Teatro Olimpico is situated in the northwest part of Palazzo del Territorio. Its exterior is a bare and irregular construction set at the end of the large courtyard of the former castle, and its value and beauty can only be admired once you step inside.

Palladio created his masterpiece inside the pre-existing perimeter walls of the ancient municipal prisons. While he faithfully adhered to the geometric Vitruvian model, he translated its circular matrix into an elliptical plan: the space of the theatre, rather complex yet extremely unified, is made up of a semi-elliptical area for spectators (cavea) set inside a flattened rectangle, and of an impressive rectangular proscenium, from whose entrances seven wooden trompe l’oeil scenes fan out, reproducing the seven streets of the city of Thebes. Originally conceived for the theatre’s opening performance (Oedipus the King by Sophocles), they have survived over the centuries and are the work of the Vicenza-born architect Vincenzo Scamozzi (1548-1616). Scamozzi was also responsible for the design, to the side of the theatre, of the Odeo Olimpico, envisaged as a “foyer” for musical recitals and meetings, and completed in around 1584.

The wooden cavea, formed from thirteen steep steps, is enclosed at the summit by a Corinthian loggia punctuated by twenty-nine intercolumnations. Statues are placed in the niches and on the balustrade that crowns the top of the loggia, in line with the columns below and the Corinthian half columns. The two corner spaces behind the loggia are home to the stairs. The entire space of the cavea is covered by a flat ceiling, painted with an illusionistic sky.

The monumental stage elevation is divided into seven bays with two Corinthian architectural orders and attic level with pilasters, and is opened in the centre by a wide arch (“porta regia”), and by two narrower openings on each side (“hospitalia”). There are smaller openings also in the side walls.

The lower order is made up of free-standing columns connected to the wall by plinths and by projecting entablatures; the second order is slightly set back and not so high. The entire surface area is not only enriched by the power of the architectural structure, but also by the plasticity of the aedicule niches and by the rich sculptural decoration. The proscenium is covered by a wooden coffered ceiling, with octagonal frame in the centre and, towards the sides, two other rectangular shaped ones with semi-circular ends.

Fanning out from the five openings of the proscenium is the scenery that represents the seven streets of Thebes, made up of illusionistic classical-style architectural wings, which the trompe l’oeil effect extends well beyond their actual depth of 12 metres, thus visually emphasising their size.

The first proscenium ceiling was realised between 1588 and 1600, perhaps by the hands of Giambattista Albanese and Alessandro Maganza. In some 17th century prints, the stage seemed to be covered by a coffered ceiling with painted panels, while a “false sky” was depicted on the cavea and on the central scenery. Following other works, the current coffered ceiling above the proscenium was created in 1914 according to a design by Marco Dondi Dall’Orologio, with decorations by Umberto Brambilla and paintings by Ludovico Pogliaghi. At the same time, the false sky was painted by Ferdinando Bialetti on the ceiling of the cavea.

During the Second World War, the scenery by Scamozzi was dismantled, to be then remounted in 1948. All of the glass oil lamps of the original scenery lighting system are still there today.

During the restoration of 1959-60 a new circulation gallery with adjoining bathrooms was created under the steps of the cavea, and two openings were made at each end of the cavea base. More conservation works were carried out in the last decade of the 20th century. 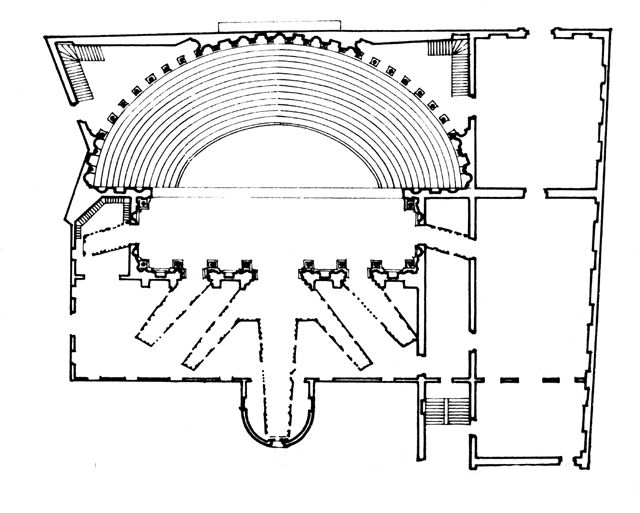